The mandrake plant has from the earliest times been associated with magical powers. It was believed that this 'semi-human' plant shrieked when pulled from the ground, a belief recorded by William Shakespeare in Romeo and Juliet;

'And shrieks like mandrakes torn out of the earth, that living mortals, hearing them, run mad'.

To avoid serious injury or madness, the surrounding soil was first loosened, then the plant was attached by a rope to an underfed dog or horse, and food was displayed at a distance and the hungry animal, rushing towards it, jerked the mandrake from the earth. 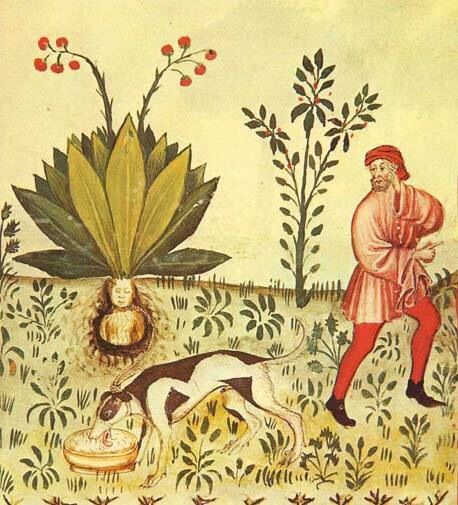 A tragedy of true Shakespeare style took place. In 1900, a Mr. F.E. Morgan assistant at the Library at Stratford-on Avon :

The mandrake root was cut by a cottager, who on realising what he had done, was terrible upset, and convinced that he was doomed. A friend knowing Mr. Morgan's interests in local folklore, came to the Library and asked him to go and see the cottager, and re-assure him, as such tales were groundless. F.E. Morgan went and found the man terribly depressed. He spent some time re-assuring him, leaving the man much improved, and promising to come again at the week-end. However, three days later, the friend arrived at the Library, and he had drank himself stupid, and in that state had fallen down the cellar steps and had broken his neck.

As F.E. Morgan said, it was of little use telling the man's friends that it was a normal accident caused by a man being paralytically drunk, but that they said was part of the chapter of events that was inevitable. They were convinced that his death was due to the cutting of the mandrake root.