The story of Mrs. Henry Wood is one of the great success stories of the 19th century. She was born during the great frost of 1814 and a century later 6,000,000 copies of her books had been sold (not counting pirate copies and her huge contribution to magazines). 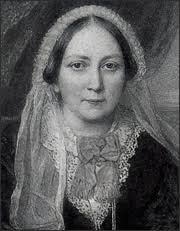 She was born Ellen Price at 18 Sidbury (called Danesbury House but rebuilt in 1889). Her father was Thomas Price, one of the largest glove manufacturies, who lived near other glovers in Sidbury (Burlingham was at 23 and Dent at 26). Up to the age of seven, she was brought up in her home of her grandmother, but when the latter died she went to live with her father at St. Mary's Terrace, London Road. She was married in Whittington Church to the head of a large banking firm in India and left Worcester, only returning some years later to consult Henry Douglas Carden, the great Worcester surgeon. She suffered from spinal trouble and used a reclining chair to write. Just before her death, she was writing 'Oswald Cray ' and broke down in health as soon as it was completed.

Her popularity lies in her plots rather than her style, with accurate detailed descriptions of the everyday life of middle and lower classes. She loved to depict life in Worcester and many of her characters were drawn from life, for she described her immediate neighborhood. Helstonleigh is Worcester, and Lucy Cheverley in 'Mildred Markle"   has been described as the counterpart of herself. Other locally set books are Mrs. Halliburton's Troubles, The Channings and Johnny Ludlow. In Mrs. Halliburton's Trouble's she wrote of the colony of glovers living in a place called Honey Fair, in reality, Upper Park Street, quite close to her home at St. Mary's Terrace and unchanged from the days when she knew it until the 1870s.

Her most popular book was East Lynne, which appeared in 1861 as a serial in the 'New Monthly Magazine', but was twice rejected by book publishers. It later sold over one million copies and was translated into numerous languages including Hindu and Parsee. It was certainly melodramatic, but few people know that it is a page from real life, based on a true story about Lord Morley's family, told by Thackeray to Mrs. Wood. Earl Morley had married Augusta Fane Child, the heiress of Osterley Park, and the Lady Isobel of the novel, 'a lovely woman married to a man she despised', according to Lady Shelley, who 'fell in love with Sir Arthur Pagett, and ran off with him in 1808, leaving her husband and a young son. Ten years later the boy had a serious illness and lay dying, and the mother returned to nurse him, unrecognized by all except her former husband. The novel's most famous line - 'Dead, and never called me mother' - brought the Victorians to tears.