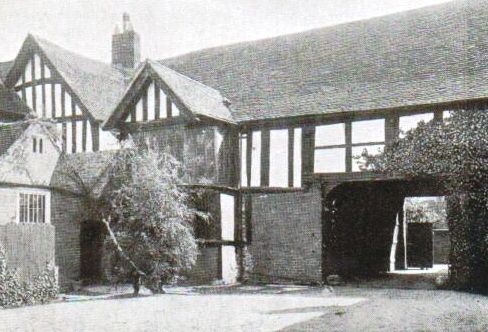 It was founded by Bishop Wulstan at the end of the 11th century for a master, four brethren and a chaplain. The establishment was at once religious and charitable, one of the houses outside the walls (like Oswald's) which catered for the reception of wayfarers who arrived after the city gates had closed at night and who otherwise would have had to sleep in the open. It was never connected with the Templars as some have thought, and the name, Commandery, probably derived from the title of a former lay superior.

It has a fine timbered roof of the time of Henry Vll; the hall has a dais for the high table; and there is also a screen with a minstrel gallery, a buttery hatch, and an ancient balustraded staircase. Around the oldest parts are Georgian additions for, like the Whiteladies in the Tything, more than one family lived there. In the early 19th century industrial buildings were added, alongside the canal, which became a small boot factory owned by Samuel Burlingham, the Quaker; and where it is said the Willises learned the trade. Until recently this part was used as Littlebury's printing works and its early industrial windows overlook the Sidbury Lock.

During the Battle of Worcester in 1651 the Commandery was in the very heat of the action and was enclosed in the hurriedly prepared defensive lines which ran from Fort Royal to the Sidbury Gate. The earthworks bastions and covered way could still be traced in mid-Victorian times.

In one of its rooms, the Duke of Hamilton died of wounds received during the attack on the Parliamentary positions at Perry Wood. His leg was shattered by a cannon shot and he was brought back to the Commandery. After lingering a few days, the duke died of exhaustion in the room still called the 'Duke of Hamiltons Room'. Tradition has it that the body was buried under the floor for a while.

Sadly, over the years as we are now in the 21st century, the maintenance required to ensure to keep the Commandery to a good standard, the atmosphere has been taken away from the feeling that l was lucky to  have had and could feel the atmosphere of the days gone by of what one's imagination could step back in time during the terrible days that Worcester incurred in the days of 1651, but still can highly recommend a visit.