The crossing at Upton-on-Severn is on the ancient and very important route from the Welsh border to the Avon Valley, by way of the Hollybush Pass, at the south end of the Malvern Hills. It was a route long used, back in medieval times, by the drovers of Welsh cattle and sheep to English markets. The medieval ferry was replaced by a bridge in Tudor times, for Leland, on his travels in 1539, reported a wooden bridge at Upton, and soon after his visit, a stone bridge was built. 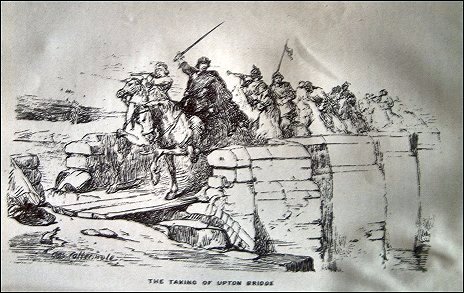 The old bridge at Upton was the scene of one of the most daring 'commando' type attacks by Parliamentary troopers a few days before the Battle of Worcester in 1651, part of Cromwell's plan to attack Worcester from both sides of the Severn. The bridge, which had a number of arches blown up, was never effectively repaired, and during the great flood of 1852, it broke down. A swing bridge was then erected but proved unsatisfactory, being difficult to operate owing to great frictional resistance. A further bridge was built in 1940, was built a few yards up-steam, with sides so high that no view of the river was possible when crossing.

The old bridge at Upton created a shoal just below the bridge which, in the days of sailing crafts, (c.1847), was far the worst in the Severn. This was the result of contraction by the arches, producing first a pool, and then a shoal of only three feet draft. An Admiralty report of 1849 reported a witness as saying:

More to be added .