We are familiar with reading about the Saturday skirmishes between supporters of the 'Rovers' and the equally ardent supporters of the 'United'. Our Monday morning papers tell us only too often, of casualties sustained by the fans of the 'Blues' or the shop windows and railway fittings smashed by the invading troops of the 'County'.

It comes as no surprise however, to read of hooliganism which was rampant in the City of Worcester about the year 1300 and which took an unusual form.

It was not enthusiasm for a league football team which set alight the not-heads among men and youths of Worcester. The feud which led to violence and horseplay in the streets of the city was between the Benedictine Monks of St. Mary's Priory (the Cathedral) and the Franciscans of the Grey Friars.

Did they shout as they jostled with their opponents 'Up the Priory'? Did the Friars, in their turn, provoke the monks by shouting 'Grey Friars rules'? Did they imitate the enthusiasts of Pompeii and scratch their graffiti on the city walls such as 'Down with the Benedictines' or 'Franciscans OK'?

The very coming of the Franciscans to Worcester produced a groan of revulsion from the Benedictines and a chronicler of the Priory wrote (in latin) 'O misery and worse than misery! This is a pestilential calamity indeed for the Franciscans Friars (Fratres Minores) have arrived in England'.

In spite of the lack of welcome, the Friars arrived in Worcester about the year 1239. They enlarged and rebuilt their Friary in 1257 but they eventually settled in what we now know was the Grey Friars in Friar Street and Pevsner says of the building which now remains that it is one of the finest timber-framed buildings in the county. There the Franciscans remained until the Friary was suppressed in 1540.

The special characteristic of the Worcester Friary in the 14th century under Robert of Leicester was said to be 'pura simplicitas' but the image of spotless purity was hardly maintained in the rough and tumble which went on between the Franciscans of Friar Street and the Benedictines living in the shadow of the Cathedral.

One event in particular is worth recording. The smouldering feud between the two houses erupted into full scale violence in 1289. A godly citizen of Worcester named Henry Poche died and in his Will he expressed his wish to be buried among the Franciscans, fancying, according to the opinion of the times, that if he should be buried with a cord of St. Francis about his waist, he would immediately go to heaven.

The monks had always been contemptuous of the condition of the Friars own burial ground which, they said, was so wet that bodies were more likely to be drowned than buried there. But it was not an altruistic desire to save Henry Poche from total immersion which made the monks bury the body in the Cathedral churchyard.

This body snatching by the Benedictines was only the latest in a long line of insults and indignities the Franciscans had suffered at the hands of the Priory monks and they appealed to the Bishop of Worcester, Godfrey Giffard for redress.

They complained that they had been attacked and wounded by the monks and certainly a sizable tumult arose in the city and the public disturbance was serious enough for the King to be informed that a riot had taken place in Worcester.

This hooliganism was the subject of an enquiry held later and there must have been tongues in the cheeks of the Benedictine monks as they explained (no doubt with looks of innocence) that no-one had hurt the Franciscans intentionally but that by pressure of the crowd, the Franciscans had been forced on to some dung heaps where they had stumbled and fallen.

When Bishop Giffard received the complaints of the Franciscans, he made haste very slowly, for he was wise enough to avoid getting embroiled in such a bitter quarrel, and when the Franciscans found that their cause was not receiving attention, they appealed to higher authority and lodged their complaints with the Archbishop of Canterbury.  Here, they were batting on a good wicket, for Archbishop John Peckham had himself been a member of the Franciscan order.

It was not long before the monks heard the rumble of the thunder coming from Canterbury. The Archbishop gave orders that the Benedictines were to dig up the body of Henry Poche and deliver it to the Franciscans. These orders were given under pain of the greater excommunication and the threat of putting the Cathedral under an interdict if his directions were not carried out within 15 days.

This was Archi-episcopal authority indeed, but to his credit, Archbishop Peckham made the Franciscans made the promise to come 'privately and with all modesty that could be' to take away the bone of contention, the body of poor Henry Poche.

'Pura simplicitas' was noticeable by it's absence when the Friars came to collect the body. They had scored such a triumph over their Benedictine rivals that they did not observe the dignified guidelines laid down by the Archbishop. Instead of coming privately and modestly to receive Mr. Poche's body they came, as the chronicler says, 'with great pomp and tumult, declaring their right with song and triumph, inviting all they could to join them as they carried the body away through the great square'. The Franciscans came with all the flags flying for the Benedictines had certainly lost this match.

It was nearly 200 years before Henry VIII called a halt to this rivalry when he suppressed the monasteries in the 16th century. If anybody won then, it was the Benedictines for Henry Holbeach, the prior, was made the first dean of Worcester Cathedral and some of the monks took their place as canons in the newly constituted chapter.

Part of the endowment of the Priory was used to establish Worcester Cathedral King's School in order as King Henry said, 'that in our church piety and good letters may ever bud, grow, blossom and in due season bear fruit to the Glory of God and adornment of the commonwealth.

So in today's Cathedral staff and the King's School we see a certain continuity with the monks of 1540.The Franciscans did not fare so well. They had laboured among the poor and sick of the city but on the dissolution of the monasteries, the house and site of Grey Friars, the church steeple and churchyard together with the houses and land they owned passed into the possession of the city in December 1539. In contact with their neighbours and rivals at the Cathedral there were no survivors. 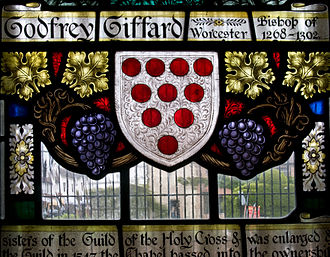 St. Oswald and the Little Devil