Old Powick Bridge is thought to have been built in the early 15th century. It was certainly standing in 1550. It is divided into two parts; the eastern with two arches over the mill stream, and the west with three arches over the River Teme.

It was the scene of Prince Rupert's attack September 1642 involving the first major clash of the Civil War, and at the Battle of Worcester in 1651, when the two arches on the Worcester side was broken down to bar the way into the City. Montgomery's Highlanders ranged the eastern bank in force, and held the fierce attacks until Lambert's forces crossed the river lower down on the bridge of boats, and then they retired to save the retreat. The two arches were probably rebuilt at the end of the 17th century, though the state of the bridge was often dangerous. On one known occasion, in a flood a coach was swept away, but the driver managed to float it to safety. Responsibility for the bridge was divided, the eastern part to the Lower Wick Manor, and the western to the Lord of the Manor of Powick, Lord Coventry. 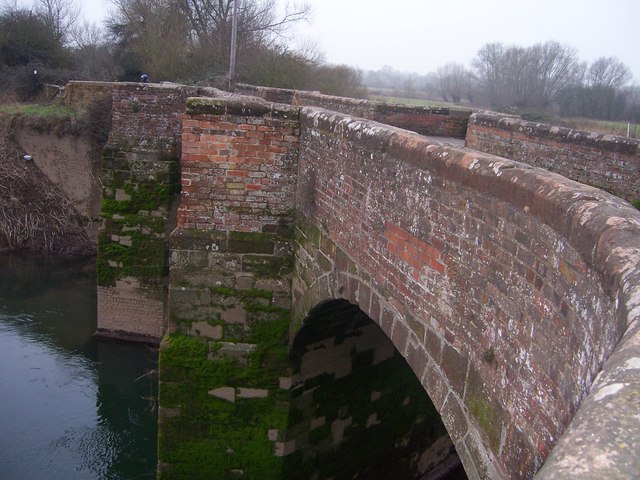 The 'New' Powick Bridge is a fine turnpike bridge, built in 1837, to the design of William Capper of Birmingham. It is of cast-iron, with sand-stone arches and abutments in the 'gothic' style to match the ancient bridge 100 yards up stream. Built for the stage coaches, it is carrying all the main road traffic to Malvern. It is only now that the design of this bridge is really being appreciated, since a period of time the County authorities were guilty of what can only be called vandalism. Originally, the eight turrets of the bridge had charming 'gothic' domes on them, and photographs show how well they enhanced the design, bit about 1950, a lorry skidded and knocked one off. Instead of repairing it, the authority of the day decided to remove all of them, and took away the ornamental lamp standards from the center arch. Further damage and improvements have since been restored with skill and care.