The Execution of Father John Wall

For several centuries the public gallows for Worcestershire stood at Red Hill on a piece of wasteland, but long since enclosed by the Sebrights. It is still possible to place the site of execution, for two ancient roads crossed here and these roads are now very narrow footpaths. The one, the old London Road, runs up the hill at the back of the houses; the other goes from north to south, crossing the traffic roundabout, and has a sign marked 'Footpath to Upper Battenhall'. Like many other ancient roads, it has been used as a marker, or boundary of property, and so has remained. A wooden cross in a garden a few yards from the modern road, on the south side, marks the site of the gallows. Father John Wall, executed at Red Hill on 22 August 1679, was the last Worcestershire martyr and almost certainly the last man to e executed in England on the score of religion. 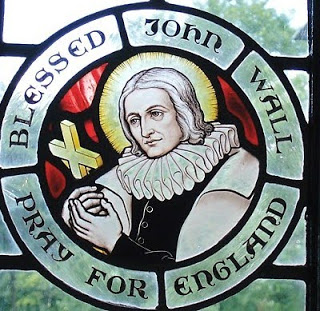 Father Wall was a north countryman whose real name was Francis Johnson. From his youth, he devoted his life to the Roman Catholic faith, was ordained in Rome in 1648 and in 1656, during the Commonwealth period, was sent to Worcestershire to take charge of the Harvington mission. For twenty years he laboured uneventfully, twelve of them as priest-in-charge of the Catholic chapel at Harvington  Hall. But he became a victim of the infamous fraud known as 'Titus Oates Plot' when scares and agitation - and in particular the so-called revelation of a Jesuit plot to kill the king and overthrow Protestantism - led to the immediate introduction of repressive legislation. Wall happened to be staying at Rushock Court when a sheriff's officer, with attendant bailiffs, arrived in the middle of the night to arrest a gentleman for debt. They broke into the room and arrested Father Wall who was in bed, under the impression that he was the debtor they were seeking.

The mistake was subsequently discovered but one of the bailiffs recognised Wall and denounced him as a priest. He was taken by Henry Townsend, barrister-at-law and son of the diarist to Sir John Pakington, people he must have known personally. But from first to last he declined to purchase either liberty or life by swearing oaths of allegiance and supremacy. The justices had no option but to commit him for trial at Worcester assizes he was charged with high treason. Nine months after his arrest the priest was sent to the scaffold.

Although 'quartered' in accordance with the practice in cases of execution for treason, Wall was first strangled to save him from the agonies of the brutal sentence, and his remains were not denied urial. His body was laid in St. Oswald's graveyard, and his severed head was taken to Douai in France, where his early manhood had been spent.

St. Oswald and the Little Devil